My Time With Baby Chix!

Home » My Time With Baby Chix! 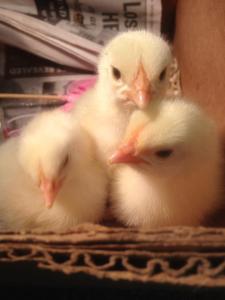 When I came up with the idea of using live baby chicks for our latest insurance agency video, I had no idea what was ahead.  At first, it was just an “idea” while chatting with a friend on Facebook.  Didn’t know if we could really put what was in my head onto a video.  But, Erin said we’d try!

Finding baby chicks at the beginning of February is not easy.  Had we waited a few more weeks, we would have had many options for “Easter chicks” at the local farm stores.  We ended up getting lucky when a friend, Betsey, found some for us PRONTO!    Thank you, my dear!

Originally, we were scheduled to receive the little stinkers at 6pm on a Thursday (the day they were born),  keeping them until 6:30pm when I would deliver them to a lovely woman who would care for them until their “screen debut” on Saturday.  However, there was a change in plans and I ended up caring for them til the next morning instead.  At first, that doesn’t sound like a whole lot of responsibility, right?  Wrong!  As I started to google about what to do, I became more anxious.  We needed a special warming light so they would be a happy temperature.  Too warm and they could dehydrate (and die??) and too cool, they would get a draft and get sick (and die??)  The articles said to make sure they knew how to drink (never coached anything other than kittens on that!) and eat.  That part went pretty well.

For every second that they were not eating, they were peeping.  It is a constant, melodic, almost calming kind of sound.  Seriously, for the first few hours, it never stopped.   I made a note to google whether baby chicks ever sleep.

I have two cats.  One didn’t care.  One was extremely curious, so I made sure to not leave the babies (four of them) alone for any period of time.  After peering into their box (with the warm bright light) for 2.5 hours, I realized I hadn’t yet had dinner.  How could I?  The babies needed a human to stare at them to insure their well being.  Smelling a hot, spicy aroma coming from the kitchen, I realized my hubby was making “wings” in the broiler oven.   Oh, how wrong!  I opted for a tuna hoagie.

While I ate, I placed them in our powder room, with the door closed.  No need to tempt fate with the cat situation.  When I went in to check on them, I nearly fainted!  All four of them were laying on the bottom of the box, flat on their faces, spread out and looking very dead.  I killed baby chicks??  In 3 hours, I managed to do this?  As soon as I started squealing and shaking the box, they all bounced up with even more energy than they had before and began their peeping song again.  Note to any of you taking this journey, baby chicks do not lay down and cuddle into a circle like cats and dogs.  They just fall down wherever they are and sleep.  And look dead.

As I dropped them off at their “foster” mom’s home the next morning, I was so relieved to know that they were now with someone who “did this” before.  God bless you, Esmeralda!

We picked them up again for their big “on screen” debut Saturday.  It was amazing to see how big they got in such a short time!  We worked with Erin Monie and Raul Gomez of Steelwire Productions.  Erin’s a client of ours and one day we just started to chat about what kind of fun things we could do with baby chicks.  And, the idea was hatched.  (Sorry)  She managed to convince a cute young couple to be part of the video.  Ron was amused by the baby chicks.  Crystal fell in complete love, lol.

After the shoot, it was time to say goodbye for good.  I purposely did not name the chicks as I figured that would be the smartest way to avoid attachment.  So, for me, they’re still known as #1, #2, #3 and #4.

Overall, it was a wonderful experience!  Thank you to all the wonderful PEEPS who helped make it happen.  Without each and every one, it would never have been possible!   (Betsey, Esmeralda, Erin, Raul, Crystal and Ron)

And without further delay, here is the finished product!

Hosfeld Insurance is an independent insurance agency offering a comprehensive suite of insurance solutions to protect you from the unexpected.